Sometime around 1859 or 1860 two cousins from Kentucky tore down “the handsomest and most commodious mansion on the Mississippi,” seemingly within months of having bought it. The two and a half story mansion, built in 1780 by a thirty-five year old former lieutenant in the French Navy, sat on over a thousand acres of land and featured three foot thick walls of water lime bricks. Three generations of the original owner’s family lived on the property until the economic crisis of 1857 and 1858 forced the family to sell the property to the two cousins from Louisville with the last names Gassett and Johnson.1 While relatively small, the plantation classified as a “large slaveholder” in 1860 lists and produced a considerable amount of sugar and molasses. So why did the two decide to tear down a stately mansion on prized land along the Mississippi? According to a New York Times article published roughly thirty-five years later, the house (and the owners) fell victim to “mysterious manifestations” that left them in “the grip of death.” 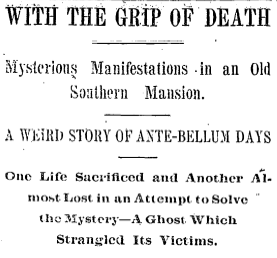 According to the story and local legend, the issues arose out of a spell the original owner’s grandmother placed on the house during a the mansion’s house warming party. “Standing in the main hall, with a glass of wine in one trembling hand and a torch in the other, she laid a spell upon the mansion, calling ‘the curse of God down on the head of any who should dispossess the owner of his blood, for ten generations, of the house he had built.’” While the incident became the subject of gossip among the more religious of the area, most in the area quickly forgot about the supposed curse until Mr. Gassett, his wife, and servants moved into the mansion. Shortly after moving in rumors swirled that the house had been “cunjered” and Mrs. Gassett became so frightened (of what she wouldn’t say) that Mr. Gassett moved her back to Louisville and shuttered the house except for a single room he planned to live in while supervising the property.

Hoping to calm the nerves of his slaves and area residents, Mr. Gassett brought a “voodoo queen” up from New Orleans to remove the curse. While the ceremony seemed to quiet fears, the unease returned when the plantation’s cook and butler fled the mansion around midnight a short time later. While neither explained what caused them to flee, Mr. Gassett became increasingly uneasy, telling Mr. Johnson the whole affair was too much for him arguing, “I can’t fight the devil.” In another bid to appease everyone involved, Mr. Johnson agreed to spend a night in the house, only to appear the next morning looking as if he had been sick for two weeks and refusing to discuss what happened.

While the incidents left doctors puzzled, an assistant overseer at the plantation named Dogherty vowed to spend five nights in the mansion promising he would not be scared by wandering rats that he believed were the source of whatever frightened the others. Unfortunately, a slave sent to check on Dogherty after he didn’t appear after the third night found him strangled to death in an upstairs bedroom. While doctors agreed Dogherty was strangled to death, they couldn’t figure out what could’ve strangled a physically strong man who had a gun on the nightstand next to him.

Perturbed by the death, a New Orleans doctor named Holliday decided he’d sleep in the house, along with a shotgun, a colt pistol, and his “finely-bred bull terrier.” Dr. Holliday, believing the incidents were the result of someone playing deadly tricks, requested his stay he kept quiet. “ According to the doctor’s subsequent story, it quickly became apparent the events were not the result of rats, cats, or humans. “

On the second night, Dr. Holliday locked up the house and was reading in bed when he noticed the bedroom door he thought he had closed was open. Upon closing it and returning to bed, the doctor looked up to see the doorknob turn and the door open followed by the sound of rustling silk and a low laugh. While the doctor says he laid motionless, but not scared (“for nothing had occurred to scare me.”), his watch on the nightstand began to move. When he reached for it he felt a notable resistance. Shortly thereafter a crashing bang erupted from the dining room, as “though all the dishes of the establishment had been let fall at once.” Upon stepping out into the hallway to investigate, a shriek of a panicked woman occurred right in front of the doctor, frightening both him and his dog. The two found the dining room as it was earlier in the night and headed back upstairs followed by what sounded like a light step and click of a high heel that continued until the bedroom door.

The doctor locked the bedroom door and laid back down in the bed. Ten minutes later the key turned in the lock and the door again opened. As the doctor began to get up something grasped him around the throat. “I never felt such a grip. I dropped my pistol, and tried to free myself. But I could see nothing, nor see anything. For the first time in my life, I knew what terror was.” Dr. Holliday managed to free himself and spent the rest of the night awake in a candlelit room vainly trying to keep the door closed. While the doctor spent the next two weeks recovering from shock, he made it out of the mansion alive. His dog, on the other hand, was not so lucky as it was later found strangled under the bed when someone went to look for it.

No explanation was found for the incidents. Seven years later the Mississippi River changed course near the former mansion2, and outside of a [handful of mentions][7], the Gossett & Johnson Plantation seems to have passed into the morass of history along with whatever inhabited the stately mansion.

You May Also Enjoy

From the Archives: The Vanishing Americans

Coding? But You’re a Historian

When I went away to start my undergrad I was not only a pretty socially awkward person (alert: still am), but I had my own computer for basically the first t...

In January 2013 the New York Times public editor wrote a column discussing how front page obituaries in 2012 “became something less than a rarity.” According...

Spent a weekend with the monks at Clear Creek Abbey